Dumb Things I Saw RVers Do

How not to load your cargo carrier.

This summer I took my youngest  on a Mother / Daughter road trip from New Jersey to the western side of Colorado to camp in the Grand Mesa National Forest. It was my hope to teach her to tow, something she was not excited about. While I was doing the driving I was tutoring my daughter on things to be aware of when behind the wheel. I used Mark Polk’s tips for towing to teach her road awareness, merging rules, and safe speeds for the conditions and terrain. As we rolled along though I saw a few things that became lessons in the “what not to do” category.

Don’t load a bunch of stuff on the bumper of your trailer and then not properly secure it. 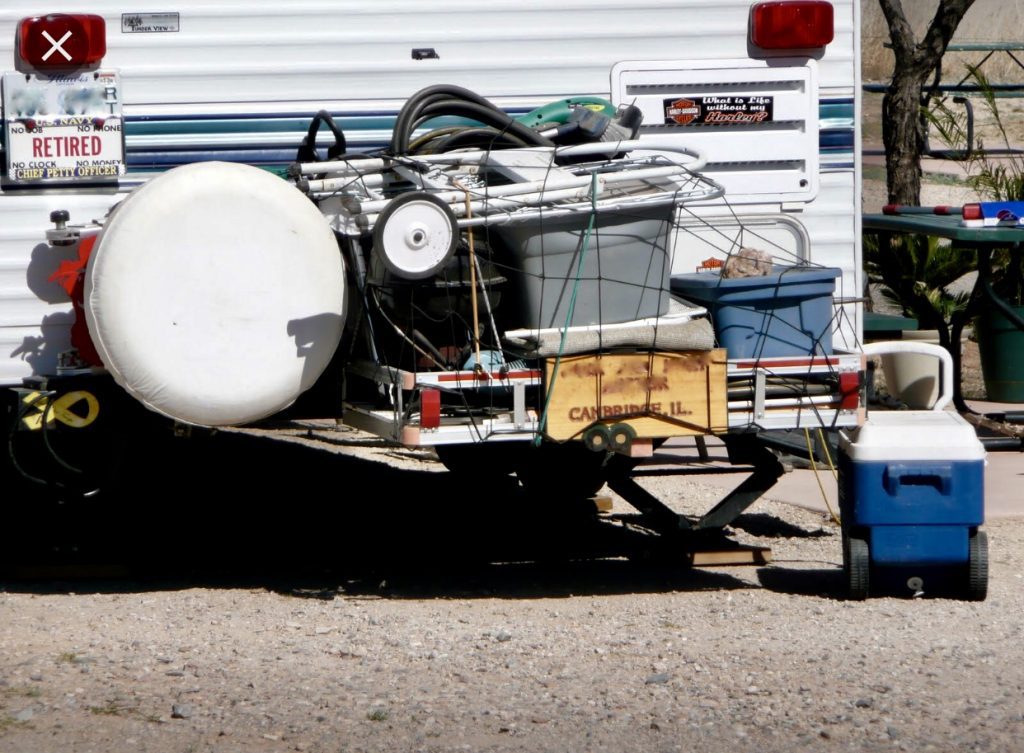 How not to load your cargo carrier.

Many rear hitches on RV’s are designed to carry a bicycle rack or bumper cargo carrier for a generator or cooler. They are generally rated for about 150 pounds. Carrying coolers, generators, extra lawn chairs and grills and strapping it all down with bungee cords is a recipe for disaster.  We were driving behind an RV with a fully loaded cargo bumper carrier filled with all of these things. In addition they also had large blocks of wood that were bouncing around because they were not secured properly. I moved to the right lane to avoid the debris falling off the back of the RV. Both blocks of wood came off and landed on the highway in heavy traffic. If you carry gear on the outside of your RV secure it with ratchet straps and/or cargo netting and make sure you’re not exceeding the weight limit.

Stay a safe distance while caravanning with friends.

We sadly witnessed the rear ending of one trailer by another in a congested area. Sometimes those traveling in groups feel the need to stay right next to each other and tailgate too closely in order to prevent other vehicles from getting between them.  The whole point of caravaning is that you are vacationing together, not driving together. If you give yourself several miles of length  between the lead driver and the tail of the caravan everyone arrives at roughly the same time.  The lead driver and the tail driver should be in touch by walkie-talkie or hands-free cell phone. The lead driver sets a safe speed and the tail driver makes sure no one has broken down and the group is staying together within several miles.  When you are slightly staggered and you arrive at the campground several minutes apart, there is no line to check in.

Dont forget to put the cap on your sewer hose bumper storage.

This little mishap was actually kind of funny. A trailer in front of us forgot to put the cap on the bumper with their sewer hose stored in it. Every time they turned to the right a little more of the hose came out of the bumper. On a sharp curve the whole thing finally fell out and rolled onto the shoulder. Although we honked we were unable to get the drivers attention. Unfortunately  unless his next camping site was a full service one he would be unlikely to discover the loss until the next time he was at the dump station with a full tank! Make sure this step is on your exit checklist!

When moving your trailer just a few feet to adjust it on a site, be sure to roll the tongue jack all the way up.

This mistake is one of my very own. I had my trailer parked at home and I just wanted to move it forward a few feet. I hitched it to the car and rolled the tongue jack up 6  or 8 inches. I didn’t bother to pull it all the way up because I was only pulling the trailer forward a few feet. Sure enough though I hit a divot  and the tongue jack struck a rock and bent. I was unable to move it up or down. It wasn’t the most expensive RV mistake I’ve ever made but it was a real nuisance. The whole tongue jack had to be replaced  because I didn’t take the extra 15 seconds to roll it all the way up. Live and learn.