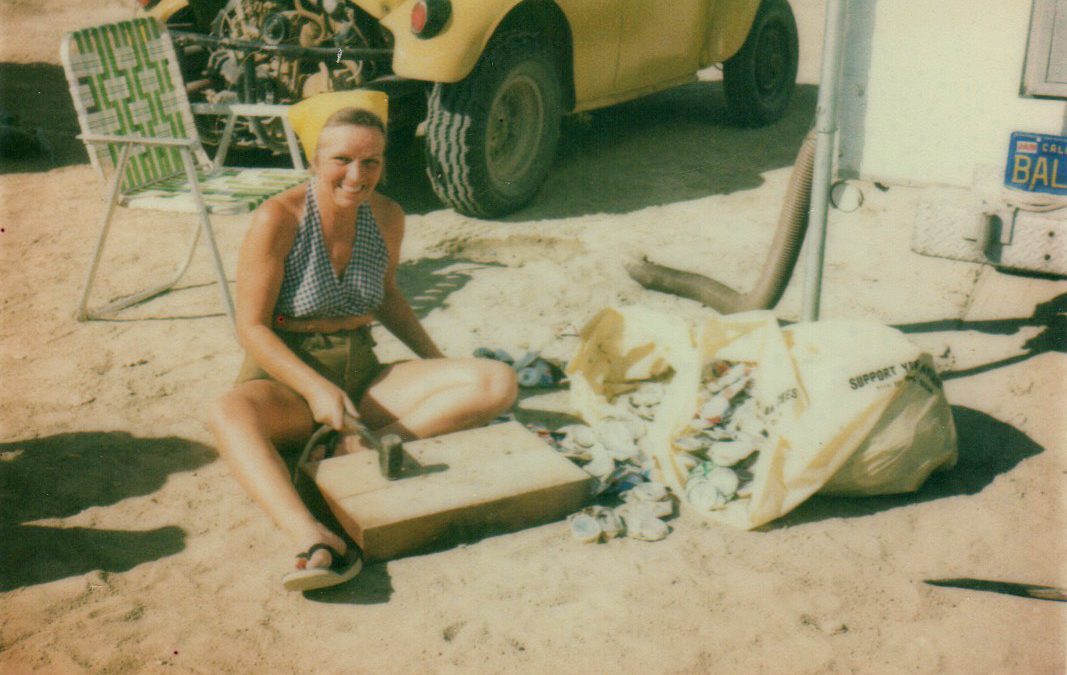 Marcy, my grandmother, would smash cans on camping trips before it was cool. She's a girl camper role model.

Are you the first girl camper in your family?

I am one of the third generation of die-hard Girl Campers in my family, with a fourth generation now raising a fifth! I’d like to tell you about Generation One – my Grandma Marcy.

Grandma didn’t grow up camping. Her family was big and poor and they spent all of their time running their auto parts store.

My grandparents took my mom and her siblings (one brother, two sisters) camping. Grandma shares that one time in 1959 they forgot the tent poles when the family went to Lake Mead, so they camped out of the back of the station wagon instead.

The earliest I remember, my grandparents had a Ford truck with a red and white camper. Later, they had a bigger truck and a newer camper. It was, to us, very plush. The part I remember most was the blue velour mattress cover on the over-cab bed!

Our grandparents let my sister and I stay with them in California for a few of the summers that my family lived in Colorado. I know once we flew, but the more memorable trip was when they picked us up in that white and red camper, and we drove back.

I recall standing on the four corners of the United States, and I also remember being at a KOA campground and rushing excitedly to the pool, which was full of very green gross water.  We stopped in Las Vegas and my sister and I sat on the steps overlooking the casino machines while they played. They took us to Circus Circus, where we slept for a while in the parking lot. Grandma tells me we didn’t stay overnight; I’ll take her word on it because I don’t recall that detail!

My grandparents and my Aunt Margie’s family belonged to a Dune Buggy club. There were 20-30 buggies that would camp in the desert for the weekend and go exploring in the buggies. Those were some fun rides! I learned to drive starting around age 12 in Grandpa’s dune buggy, and later in his Baja Bug that he converted from an old Volkswagen. Being the oldest of the cousins, I though I was pretty hot stuff!

Extended family camping was common for Easter and Thanksgiving. At Easter, the ladies would have an Easter bonnet parade and the adults would hide eggs for the kids to hunt. Grandma told me that after one egg hunt, someone found a rattle snake in the bushes – boy, I’m glad I don’t remember that one! One year the men decided they wanted to have an Easter bonnet parade! That was a load of laughs!

Sitting around the fire one chilly evening, I asked Grandma if her feet were cold in her flip flops (well, back then we called them thongs) and she told me that as long as her torso and head were warm, her feet were fine. I guess that’s where I get my love of being barefoot!

One of Grandma’s camping pastimes was to sit with a block of wood and a sledge hammer and crush all the aluminum cans. And with that party group, there were plenty of cans that needed crushing!

When my grandparents bought a motorhome converted from a Frito Lay delivery truck, I thought it was the coolest thing in the world. They took my cousin, my sister, and me on a summer vacation up the coast of California and into Oregon in the summer of 1979. We three girls slept in a tent outside the motorhome. Once, when Grandma was making lunch on the road, the refrigerator door didn’t latch all the way and when Grandpa took a corner the cottage cheese fell out on the the carpet! What a mess!! I also recall seeing a mouse in the bathroom, and my terror kept me from going in there any more often than absolutely necessary the rest of that day!

For many years Grandma lived in a vintage trailer (back then it was just an “old” trailer; I wish she still had it now!) at the Fountain of Youth Spa Resort at Salton Sea. Though she lived by herself for the most part, she was never really alone because she had so many friends in the park, and had a lot of family visits. She spent her days and evenings in the hot mineral waters – what a relaxing way to enjoy retirement!

Every January, Grandma still spends a week in the 5th wheel in Quartzsite with my Aunt Kathy while my aunt works the RV Show. Grandma doesn’t want to spend all day at the RV show, so she stays at camp reading and taking walks.  Pretty much the same as she does every day at home! She is perfectly happy to spend her days in quiet solitude. At nearly 98, she may not feel up to the challenge of boondocking in the desert and bouncing around in a dune buggy, but she’s still a cool old gal who loves to play video poker at the casinos, take walks around the block, and sip on Fireball during family card games.

I’m very grateful for the camping memories that I have with my Grandma. In my teen years I was very close to my grandparents and I truly appreciate the fun and the family values that I learned from them.

Up next: Camping with Mama