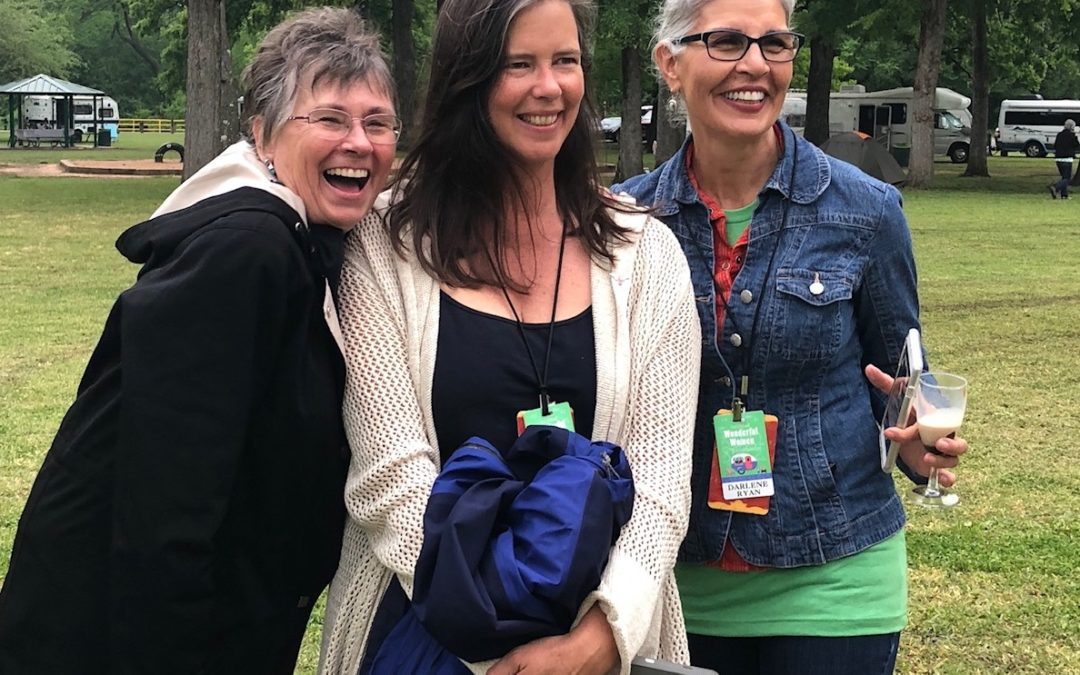 (This post is from a talk first given by Mary Ellen at the Wonderful Women of Waxahachie event hosted by Janine Pettit in April 2019 to an audience of 100 fellow women campers in Waxahachie, Texas)

Hey friends, a show of hands please … who here has already experienced their first midlife crisis?

I was lucky enough to have my first midlife crisis at 31. And I’m having my next one right now at 56. I hope to have another somewhere in my 70s. Maybe one every twenty years or so . . .

My first midlife crisis happened to me in an unlikely place – a beautiful soft white sand beach, a mile below the rim of the Grand Canyon, along the Colorado River.

What was I doing there? I was a 31-year old CPA who had begun my career straight out of college, going from graduation to San Francisco in one week’s time, working for what is now the largest accounting firm in the world, Deloitte.

Working there was great fun. For an international accounting firm, it was progressive and innovative, offering world class training alongside lots of talented young people. Living in the big city in my 20s was a thrill. I wore suits, silk blouses and high heels. Went out to fabulous restaurants and dance clubs. Played on the firm’s softball team and helped plan its social events. I worked on multi-national, Fortune 500 accounts for six years. I never received less than a 20% annual raise, and was on the track to becoming a partner. It was a dream life on paper.

But I had a few other itches that needed scratching. Another part of me wanted a life outdoors. My first love at the time was Yosemite and the Sierra Nevada mountains of central California. I went there every chance I got. Hiking, backpacking, camping, swimming in its lakes and rivers, watching world-class climbers tackle El Capitan, hiking 5,000 feet up to the top of Half Dome and Cloud’s Rest. Reading and researching everything I could about these places and their histories.

“How could I live and work in Yosemite?”, I wondered from my office on the 40th floor in San Francisco’s Financial District. I didn’t want to be a ranger or a docent who gave two-hour talks to tourists. I didn’t want to be a waitress or a clerk at the hotel. I wanted somehow to immerse myself in it. I couldn’t quite piece together how to make it happen.

So how did I find myself on a beach at the bottom of the Grand Canyon, embarking on a midlife crisis at 31? My mother. She had invited me to join her, and several of my siblings on a rafting trip. I was ambivalent. A week on a boat with a bunch of strangers in the middle of a desert? It’s not Yosemite or the mountains, I thought. But if you’re paying, I’ll tag along.

By night three of the trip, something was shifting in me. I stood on the beach at dusk, watching the river, chatting with the lead river guide, Bill. We were joking around, trying to guess each other’s ages. I guessed him to be ten years older than he actually was. He guessed me to be ten years younger than I was. We had a good laugh. Then he said, that’s because you haven’t lived your life outdoors. You haven’t lived your life outdoors. Those words stung me. I’m outdoorsy, I thought . . . I hike, I camp. But he’s right. I haven’t lived my life outdoors and I want to.

Later that night I slept out in the open, outside of a tent, on the beach next to my sister, Boo (she got the interesting name, I got Mary Ellen). It was mid-August and the middle of the Perseid meteor shower. Far from any city in the middle of the wilderness, deep in the Grand Canyon, the night sky was alive with shooting stars. I kept nudging her awake. “Boo, did you see that shooting star? Boo, there’s another one. And another one!” I watched for hours. And I thought about a life outdoors.

By the end of the trip, my life had changed. I just didn’t know how profoundly yet. Coming back to civilization, I was disoriented and unsettled. My brother couldn’t wait to get his hands on a newspaper and catch up with baseball scores and the stock market. I couldn’t relate. I felt sick, sleeping inside a hotel room that night, staring out the sliding glass door, thinking that’s outside on the other side of that glass. And I’m inside. I want to be outside. What am I doing here?