Episode 183: Ford Expedition Review plus Pros and Cons of SUV versus Truck 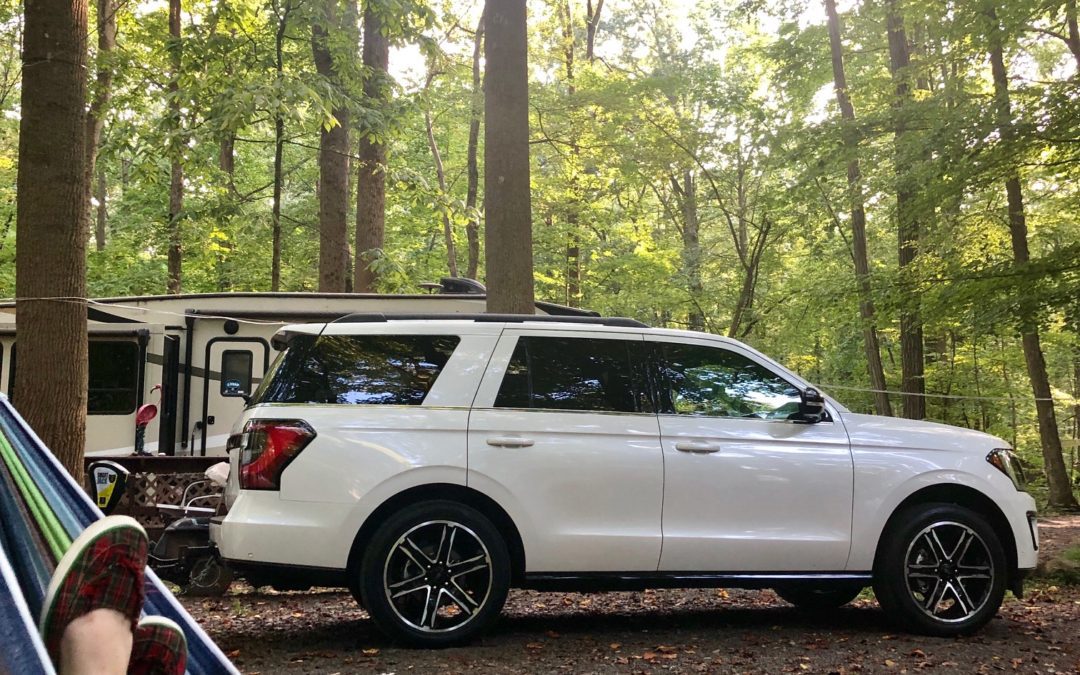 Fun with Ford! I recently had the opportunity to test drive the Ford Expedition for a week. I have been considering switching from my F150 truck to an SUV so  I put the question out there to Girl Campers – do you prefer an SUV to a truck and, if so, why? There were those who would only drive a truck and others that only want an SUV. Here are some of the pros and cons from our Girl Camper Poll.

This past week I had the opportunity to road test the Expedition.  I was personally interested in this particular model because, as I said earlier, I have been considering switching from a truck to an SUV and the Expedition has the same engine as the F150 that I drive. They both have the 3.5 L V6 Eco Boost  with the ten speed transmission. I knew that I would be happy with the engine performance but didn’t know if I would prefer the enclosed luxury model SUV to the Crew Cab Lariat short bed that I currently own. In 2018 the Expedition got a complete overhaul. The redesign included the 10 speed transmission, more horsepower, and better gas mileage.

In addition to mechanics, the interior was completely re-imagined as well. 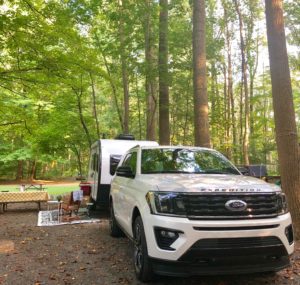 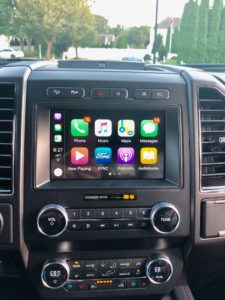 In addition to the beautiful interior, the exterior had many amenities.

The Expedition had lots of power and towed really well. I took it out on an overnight camping trip about fifty miles from home. I was towing a trailer that weighed about 4,500 pounds on a vehicle with a tow capacity of 9,300 pounds so I was well within the limit. I towed it without a weight distribution hitch or anti sway bar. I took the winding back roads to the campground and the highway home so I experienced its towing power in two different elements. I was impressed that when I was pulling up hill and needed power the Expedition responded. It changed gears seamlessly without feeling any loss of power or struggle.

I did not have the opportunity to use the Pro Trailer back up assist because that requires measuring and input into the vehicles computer. I read the directions  in the vehicles book and it looks fairly simple and straightforward. The program allows you to enter more than one trailer and there is a lot of on line information with tips and tricks for using it. It seems simpler to learn to use Pro trailer back up assist than to learn to back a trailer up!  What I did use while towing and backing up was the 360 degree cameras. The rear camera allows you to back up to the ball on your trailer really easily and without a spotter. The side cameras were really helpful when backing into my site at the campground which was quite rocky. I turned the side camera on and could see how close my tires were to the rounded boulders that were jutting out of the ground on the edges of the campsite. 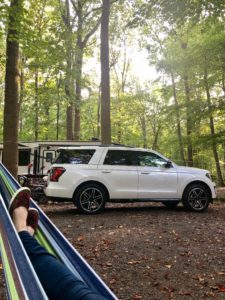 I really liked the available cargo space in the rear of the Expedition and set it up to see if I would be comfortable using it as an option to camp in when I don’t feel like towing or want to go someplace that trailers are not allowed. I was pretty excited about the available space and how well the space could be used. The Expedition is so roomy that it can hold a full size mattress in the rear or be made up with a twin bed with lots of space left over for gear. Once I had my mocked up bed the second row seat had a feature that allows it to tilt up and slide forward making it easy to get in and out of the SUV. Once I was in the bed I was able to sit up in it without my head hitting the ceiling which would be a big plus when using it to camp in. I also really loved the viewing skylights on the roof. They covered half of the space and would be great for star gazing if you were camping in the Expedition. The skylight also opened so you would have airflow as well. One last bonus for car camping was the rear privacy windows!! 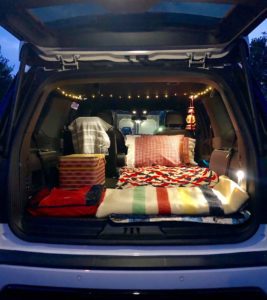 There were one or two things I didn’t like about the Expedition. I wished that there was some kind of rear step built in for accessing the back of the SUV from the ground. It sits really high and you would need a stool to climb in and arrange your gear. I also prefer a skylight system that allows you to open the rear but leave the portion over the drivers seat closed. I like the extra light but not beating down on me when I am driving. It also comes with a pretty hefty price tag. All that technology comes at a price and in the case of the Expedition Limited Stealth 4 x 4 that I was testing, that price was 78K. The consolation is that warranties are much longer now and people often put 200K miles on a vehicle before they finally get a new one. You can get a regular Expedition with standard features starting at 53K. 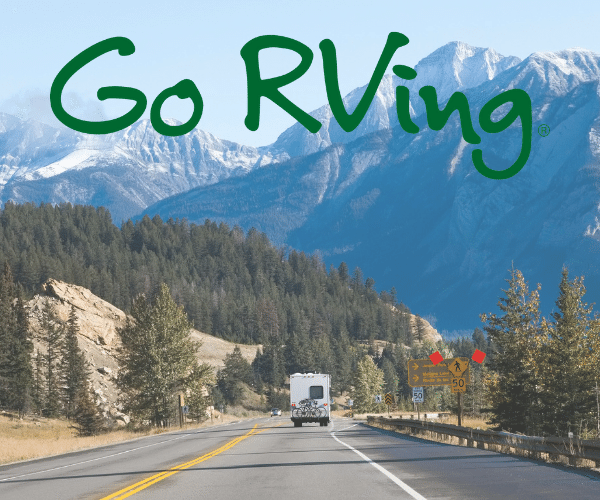